The Beast is back, baby!

Bringing back the original, more stable mold! Originally Posted by Innova Customer Service Thank you for throwing INNOVA. It appears the main question here is: Will Beasts only be produced with the new “old mold”? The answer is yes.Here is the whole story which should answer all of your other concerns.The Beast was created in late 2002. After Barry Schultz won his second world championship in 2004, Dave Dunipace made a slight change to the Beast mold to make it a little less high speed stable than the original. He felt the original Beast was too similar to the Orc. Since the original mold was retooled, we have only able to produce the new retooled Beast.In 2014, problems arose with the Beast. Malfunctioning mold parts could no longer be used and were retired. We ordered new Beast parts from our mold making company. They mistakenly produced the Beast from the original disc specifications and not from the updated 2004 specifications. So now we have a new “old mold” Beast. Barry Schultz was very happy about it as he got his beloved original Beast back. Since we can no longer make the Beast with the faulty retooled parts, every Beast going forward will be made with the new “old mold”. It is possible some retailers will continue to have older Beasts in stock until they sell out.The flight numbers on the Beast will remain unchanged as they accurately reflect the flight of the current version of the Beast. Collectors will be able tell an original old mold from the new old mold as the new mold does not have patent numbers. The only way to tell the difference between the retooled mold and the new “old mold” Beasts is by the shape of the rim. Most Beast throwers and savvy collectors are already aware of these facts. Again, all Beasts going forward will be made in the new “old mold”. 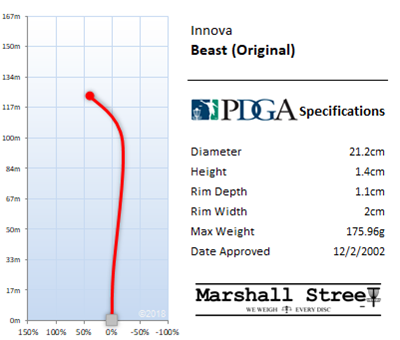