The H3 has been retooled!

The Prodigy Disc H3 V2 is a speed 11 Hybrid Driver that has been built upon the characteristics of the original H3 to create an improved and superior disc. Like the original H3, the H3 V2 is stable to slightly over stable, depending on the thrower’s power. The H3 V2 sports an upgraded shape from the original H3, with a slightly shallower rim depth, offering an easier grip, and an updated outside rim that allows for a consistent, yet faster flight with more glide. This allows the player to gain more distance, while maintaining dependability and a slightly over stable finish. The H3 V2 can handle any condition thrown its way, and is an excellent choice for backhand and side arm throwers alike. Core Team member and National Tour Champion, Cale Leiviska said, “The H3 V2 has improved greatly. It’s not quite as over stable [as the original H3] and has significantly more glide. I am excited about this because its distance fits perfectly in between the midranges and X3’s which I have been throwing a lot. [It is] very easy to throw and was consistently ripping straight for a while and finishing left every time for me.” 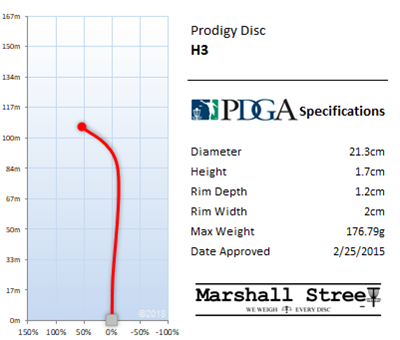